The unique natural bathing habitat was opened in Blovice in 2014 and has been very popular since then. The modern complex offers two swimming pools, social facilities, refreshments and a beach volleyball court. You will find the swimming pool right at the arrival to Blovice from Spálené Poříčí on the right side. The parking is about 200 meters behind the turn. 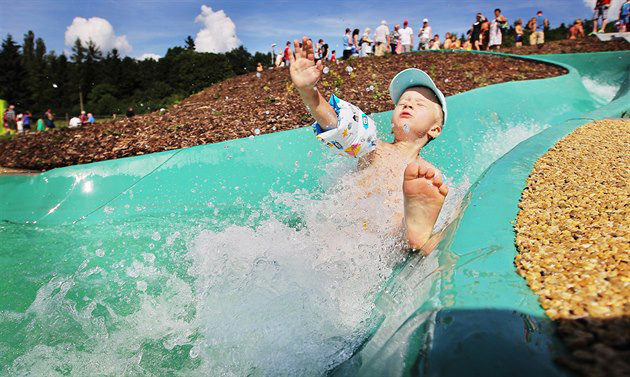 Štěnovice is a village located directly on the route between Pilsen and Hořehledy, about 20 minutes drive from the golf course. Just turn in Losiná, and after 3 km you are there. There is a small car park on the edge of the village, just 200 meters away. The place is tiny but beautifully connected with nature. Do not expect sandy beaches, snacks or water slides. The water is clean and fresh even in the hot summer. 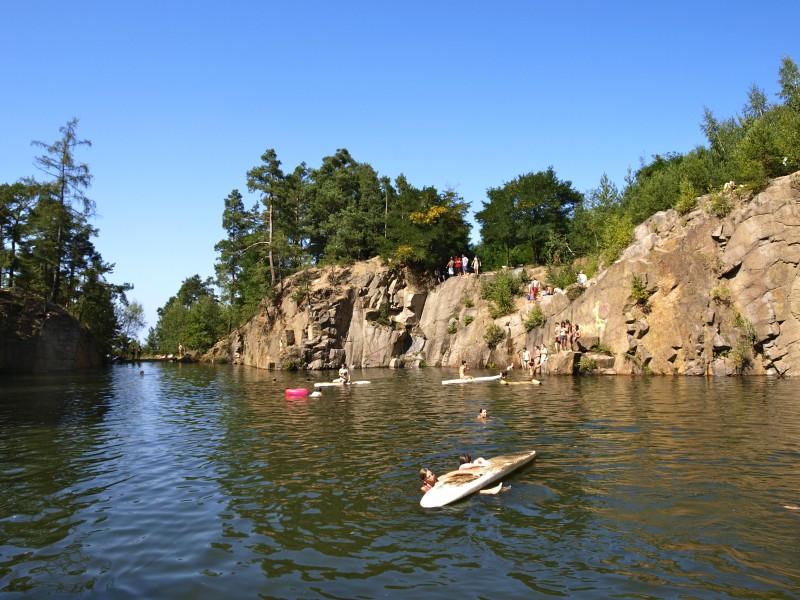 North of the village of Ejpovice (near Rokycany), there are flooded surface mines. Today, the river Klabava flows through the area, which serves as a remnant of iron ore mining from 1956 to 1966. Flooding of these quarries created Lake Ejpovice with an area of 44 ha and a depth of 43 meters. The Ejpovice Cliffs are also a part of it, which offers a nice view of the surroundings.

Distance:: 30 km by car by bike Dificulty: low Suitable for kids Suitable for: stroller or wheelchair 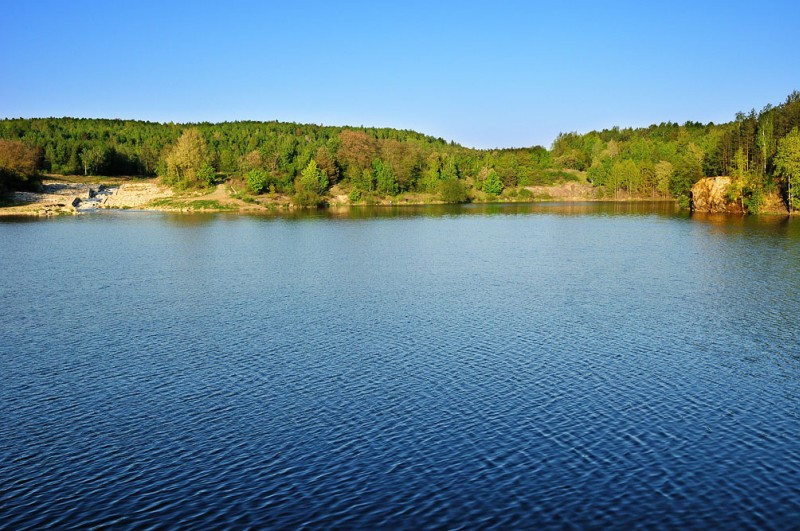 The smallest town that has ever been awarded the title of "Historic City of the Year" is Spálené Poříčí which is only 3 km from Hořehledy. The town offers its visitors several restored historical monuments - a Renaissance castle with parks, a Baroque granary in the courtyard with a permanent exhibition of cartoon humour by Jiří Winter, a Jewish cemetery and a former Jewish merchant's house, the church of St. Mikuláš, a mill with a functional mill wheel and much more. It is best to visit the information centre directly on the square.

Distance 3 km by car by bike on foot Duration: 3 hod Difficulty: low Suitable for kids Suitable for: stroller or wheelchair

In September 2014, the first Buddhist shrine in the Czech Republic was built on the opposite peak of the Hořehledy valley. The stupa can be reached by a refreshing walk directly from the hotel. The reward for climbing the hill will be a wonderful view of the surrounding countryside and a place full of energy and activity. Although you may not have a relationship with religion, this trip is definitely worth it

Distance: 3 km by car by bike on foot Duration: 2 hod. Difficulty: medium Suiutable for kids Suitable for: stroller or wheelchair 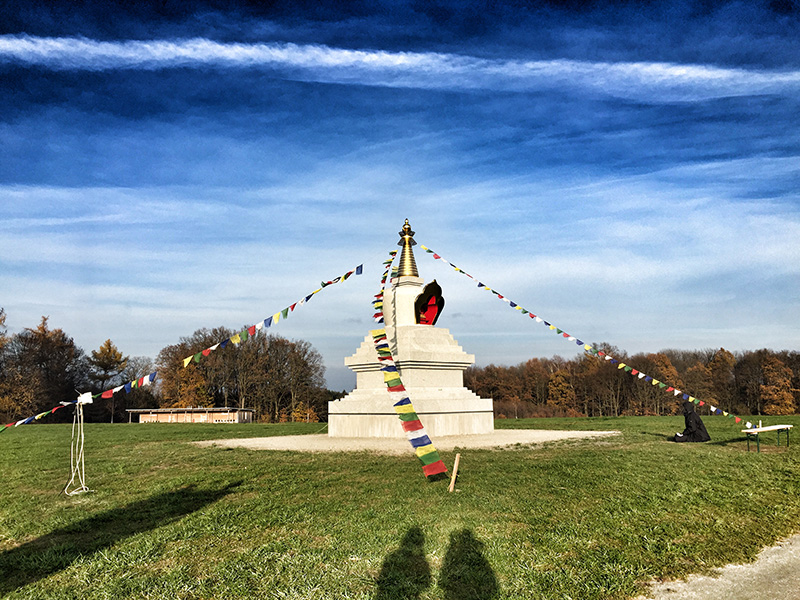 Classicist hunting castle Kozel built at the end of the 18th Century. The four-winged ground-floor building around the rectangular inner courtyard was supplemented by two pairs of buildings - a chapel with a riding hall and a counterpart to the butler with a stable, thus creating a complete complex. It also includes a beautiful park with a pond (boat rides) or a mini golf course. 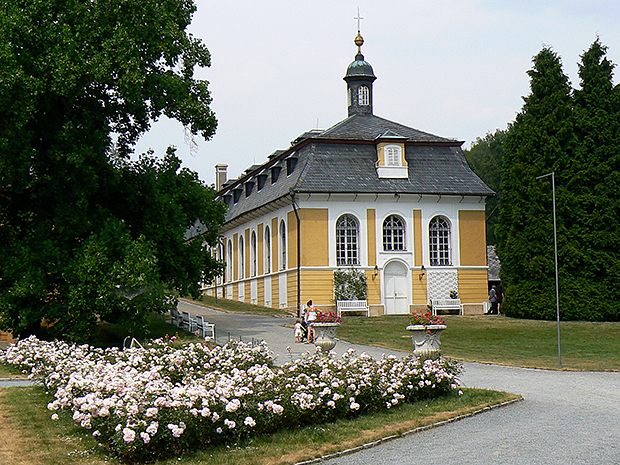 You can park your car at Kozel Castle and follow the blue path through the park and the forest to Hádecký potok. Here you will join the F.X France nature trail, from which you will descend to the yellow sign by the Neslivský pond. The yellow one will take you back to the blue sign directly below the ruins of Lopata Castle. The trip can be supplemented by a tour of the castle park or the castle itself. 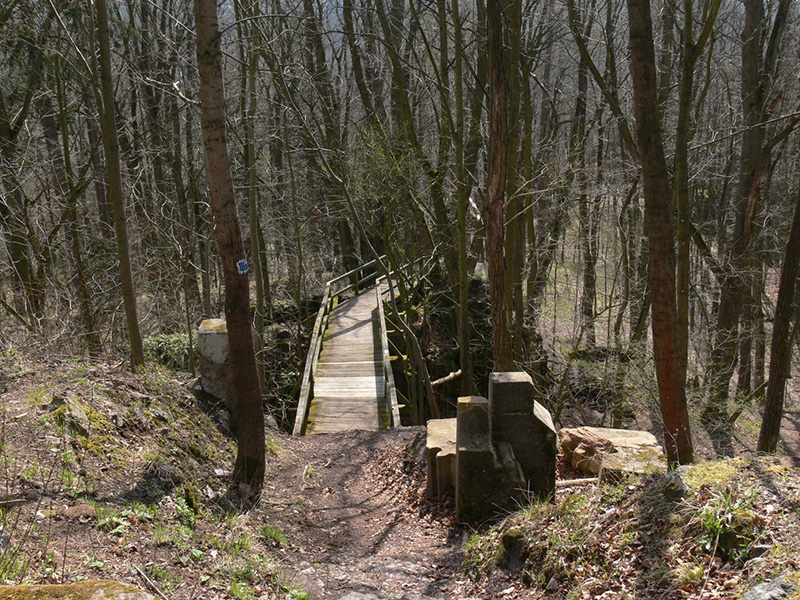 Radyně Castle stands on the hill of the same name (569 m above sea level) between Pilsen and Starý Plzenec.  This royal gem was built before 1361 during the reign of Charles IV.  Today, only the ruins stand from the former royal castle = the perimeter walls of the palace with both towers. 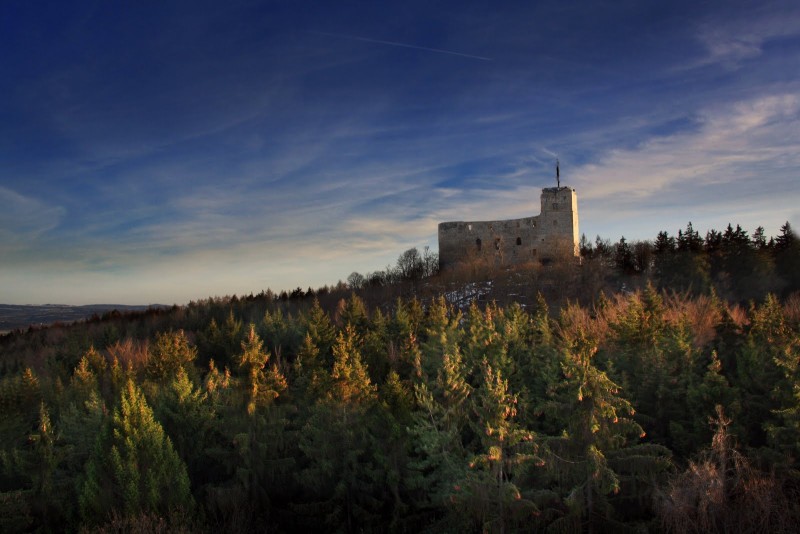 In Rožmitál pod Třemšínem, you will find the Podbrdské Museum founded in 2010, which also includes an exhibition of historic cars. The exhibition will introduce you to the oldest history of the poor region under Třemšín when the estate was administered by the Lviv of Rožmitál and to the time when Jakub Jan Ryba taught and worked here. There are also original works of folk art, the Church of St. Vitus made of rye straw stalks on a scale of 1:60 and the largest collection of carved coats of arms in Bohemia

Distance 18 km by car by bike Difficulty: low Suitable for kids Suitable for: stroller or wheelchair

Nebílovy Castle is located about 20 km from Hořehledy towards Pilsen. Nebílovy Castle is a representative of typical Viennese Baroque architecture, unique in the Czech lands. Tuvor's painting, especially the dance hall, is absolutely unique. The 1400 m2 painting presents a fantastic subtropical landscape with animals, plants and ancillary architectures. At present, the front castle wing is open to visitors together with three rooms and a large dance hall in the representative rear wing

Distance: 21 km by car by bike Difficulty: low Suitable for kids Suitable: for stroller or wheelchair 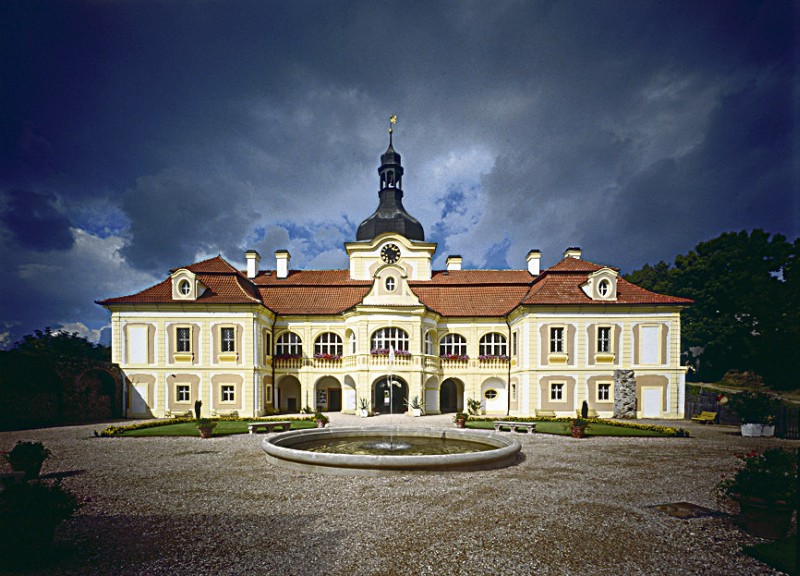 The largest mining museum and, at the same time, one of the oldest museums in the Czech Republic, was founded in 1886 in Příbram. Its long existence has enabled the creation of a large number of exhibitions and attractions, thanks to which the museum is visited by over 100,000 people a year. 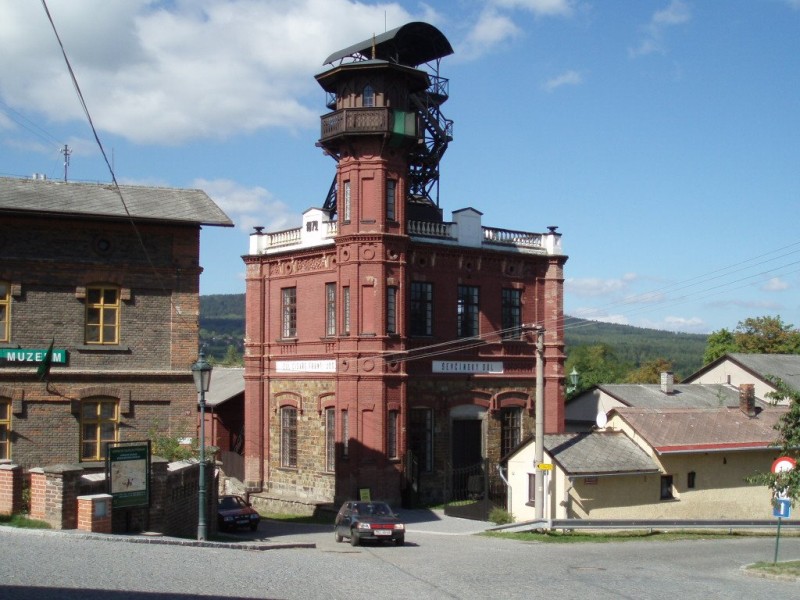 Zelená Hora Castle, the dominant feature of Nepomuk, was built on the site of a fortified hill originally from the Hussite wars. During its history, it changed a large number of owners and administrators and became known to the general public thanks to the filming of Miloslav Švandrlík's novel - Black Barons. The building is part of the Ministry of Culture's project to save valuable monuments and it is currently only accessible during the summer.

Distancet: 20 km by car by bike Difficulty: low Suitable for kids Suitable for: stroller or wheelchair

You will find the Blatná water castle on the road connecting Nepomuk and Písek. Today's castle complex Blatná is undoubtedly one of the most historically valuable and architecturally most important monuments of its kind in our country. With its long history, distinctive architecture in the rare preserved environment of parks and water areas and the current state, it is one of the jewels among Czech castle complexes. With the beautiful view of the castle itself and its surroundings, you can enjoy Romanesque carriage rides, various period events or falconry demonstrations.

Distance: 39 km by car by bike Difficulty: low Suitable for kids Suitable for: stroller or wheelchair 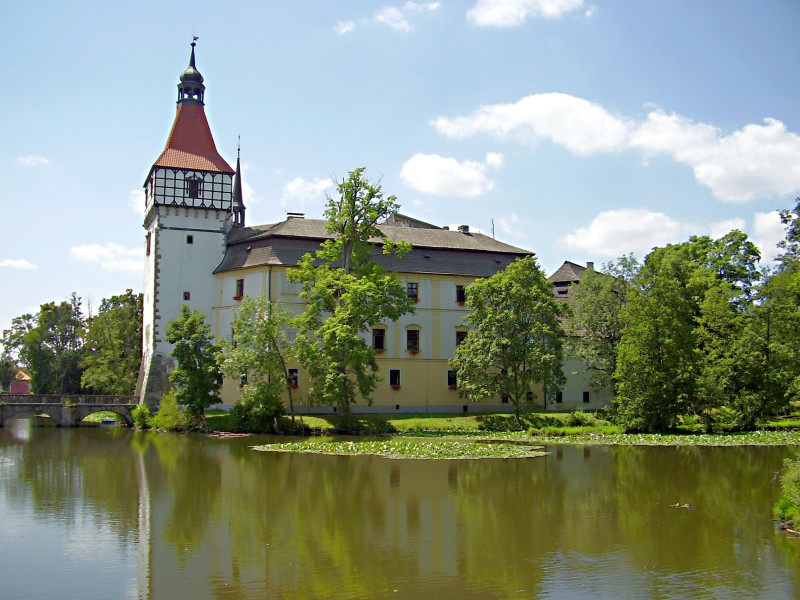 The ruins of Valdek Castle can be found south of Hořovice. Valdek was founded in the second half of the 13th century by the powerful Buzic family. Only the ruins of the original large castle are preserved today, except for the massive tower, the walls of the palace and several outbuildings, and the remains of the walls. At the end of the 19th century, the castle, then part of the Hořice estate of the princes of Hanau, was somewhat restored in the spirit of the Romanesque ideas of the time. In particular, new linings were installed in the gate and the gate through which the castle is entered and the windows of the northern palace. The castle, standing in deep forests, gave rise to many legends. In the 19th century, the Roman ruins attracted Karel Hynek Mácha in particular, who intended to write a four-part historical novel from the time of Wenceslas IV, one part of which was to be called Valdek. However, only excerpts from the novel have survived.

Distance: 39 km by car by bike Difficulty: low Suitable for kids Suitable for: stroller or wheelchair 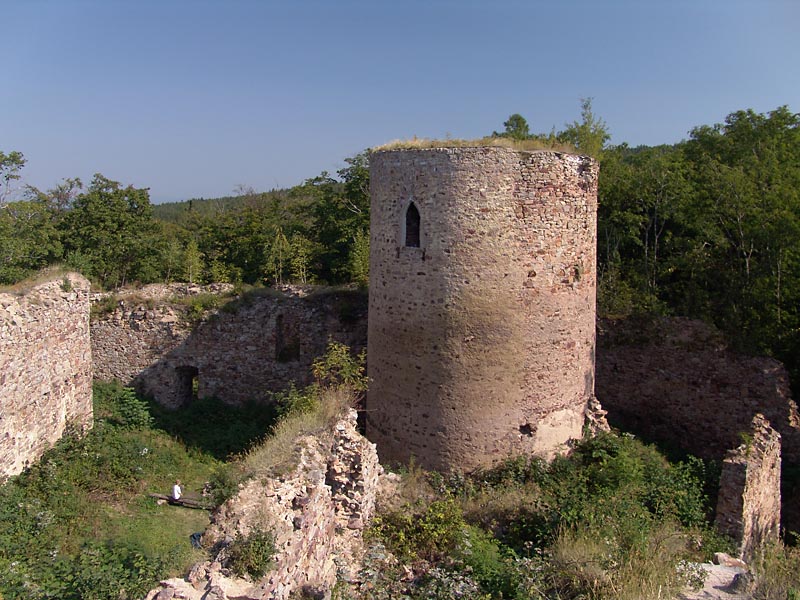 The Hvížďalka nature trail ends about 400 meters from the restaurant behind the Bradava River in the direction of Spálené Poříčí. It leads around the pond of the same name and several other sights (including a functional mill) to the castle in Spálené Poříčí and measures exactly four kilometers. An ideal afternoon walk! 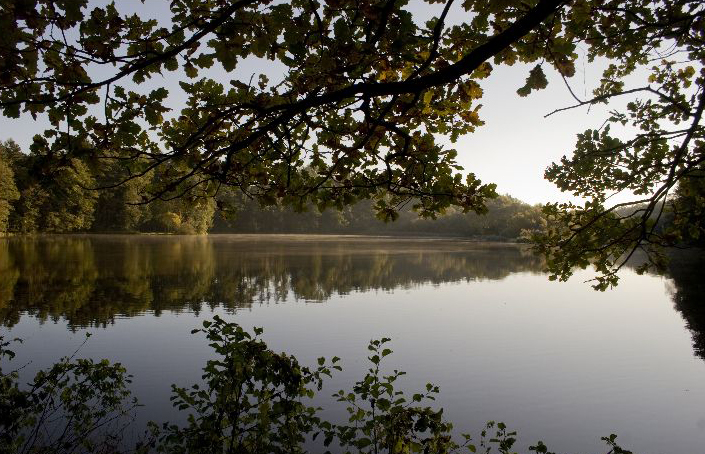 A marked cycling trail passes directly through Hořehledy, which is part of a complex network of routes intersecting the entire Brdy. In the past, the town of Spálené Poříčí devoted a lot of money and energy to the development of cycling tourism in the vicinity of Hořehledy, and so a high-quality portal www.plzenskonakole.cz was created, where you will find all the necessary advice and information.

by bike on foot Difficulty: MEDIUM Suitable for kids 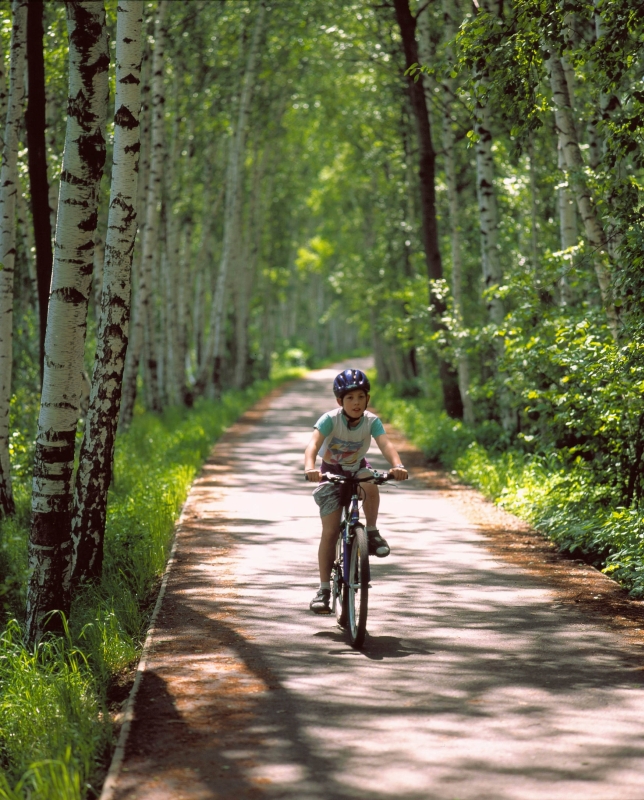 The most attractive tourist location nearby. The untouched environment of the military area is currently accessible only on weekends and on marked paths. The trip can be managed on foot, but you will return the same way. The starting point is in the village Trokavec and to the ponds and back it is 10 km. If you ride a bike, we recommend that you drive all the way to Teslín and return to Hořehledy along the main road = over 20 km. 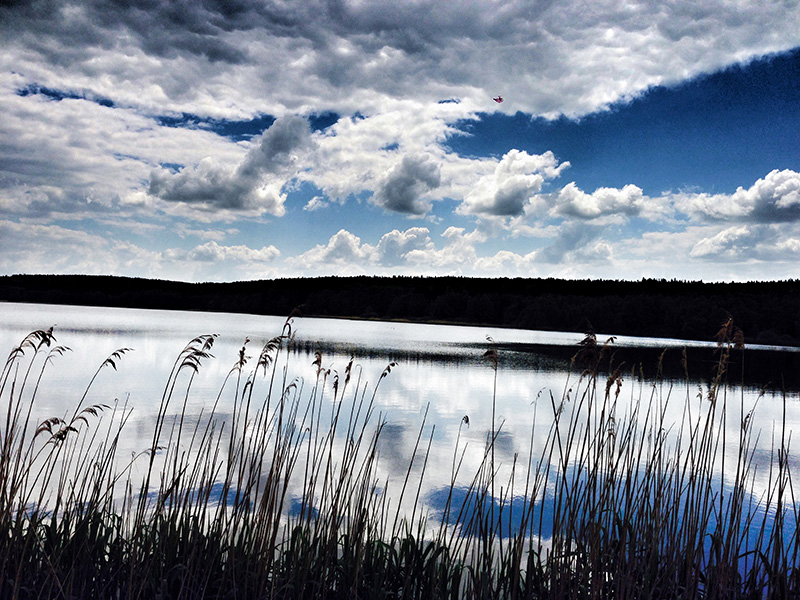 At the hill Třemšín (near Rožmitál pod Třemšínem) at an altitude of 827 m.n.m. is located on the site of a former castle 11 meters high wooden lookout tower from 1970. It offers a view of the surrounding Brdy forests. When climbing, don't forget to refresh yourself in the natural well. Start either in Hut pod Třemšínem or, for more sporty people, we recommend setting off from the village of Teslíny - a unique march of 22 km in untouched military space with beautiful views of the region awaits you. 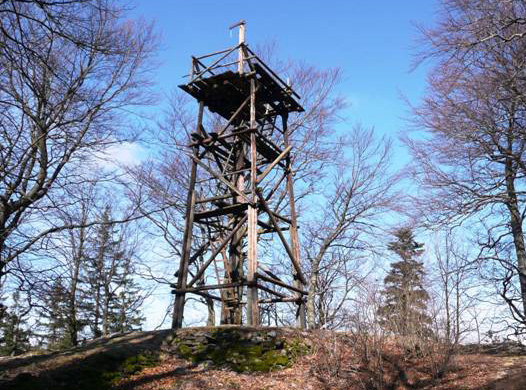 The modern 28 m high iron lookout tower built above Rokycany in 2014 is accessible free of charge and in any weather. From the lookout tower you will see important peaks of Brdy, Šumava, Český les, Krušné hory and České středohoří. We recommend parking your car right behind the railway station in Kamenný Újezd and going up the blue road. With good planning, you can continue to Rokycany after exploring the area and return to the car by train. A beautiful new path leads to the lookout tower, suitable for a pram and a bicycle. 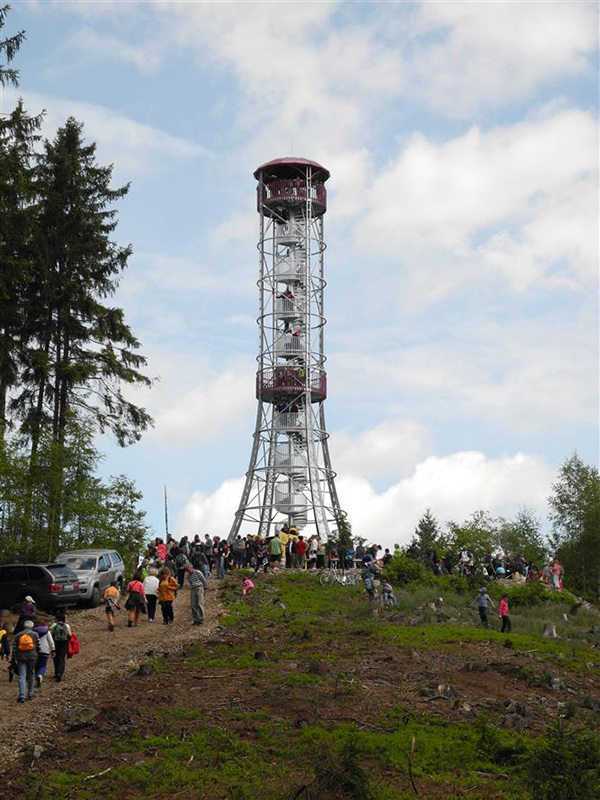 The lookout tower in Železný Újezd near Čížkov, which is also called "Na skále", is one of many metal lattice structures that combine a mobile network transmitter with a lookout tower. The lookout tower rises at a height of 672 m.n.m. and offers a fantastic view of the surroundings (Radyně Castle, Zelená Hora Chateau, the entire Brdy zone). You can leave the hotel by car, bicycle or on foot, the journey there and back takes about 4 hours. 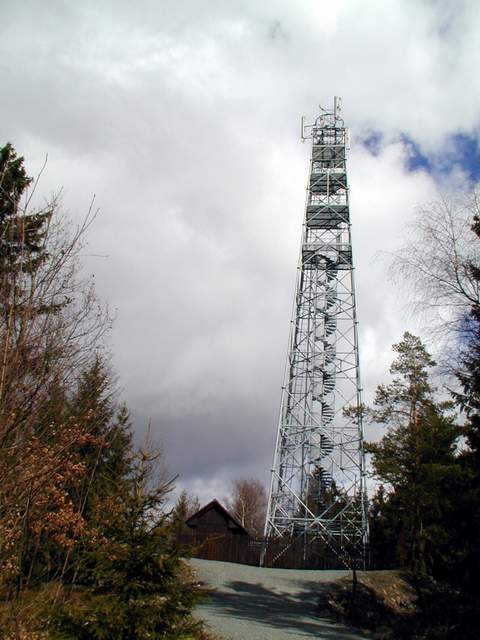 The town of Spálené Poříčí is only 3 km away. In addition to visiting historical monuments (castles, chateaux, museums), we recommend a visit to the local information centre, where they have prepared many activities for children, led by a popular historical tracker! 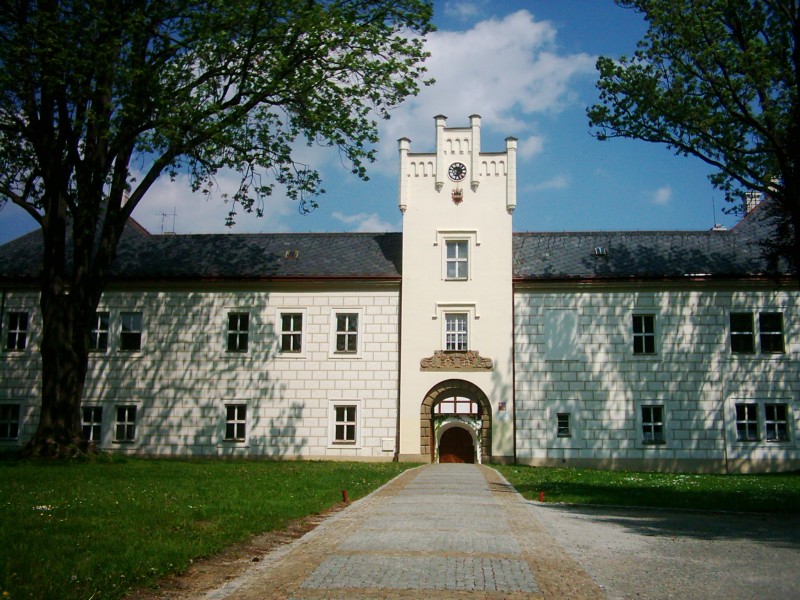 The zoo in the West Bohemian metropolis was established in 1926 in the Doudlevce district near the city centre. Since 1963, it has been operating in the current area in Lochotín, where it merged with the neighbouring botanical garden in 1981. The rugged natural area has an area of 21 ha, and since 1996, it has been intensively transformed into a zoogeographic bio park. You will find many modern exhibits here, such as brown bears, chimpanzees, monitor lizards, lions and much more.. 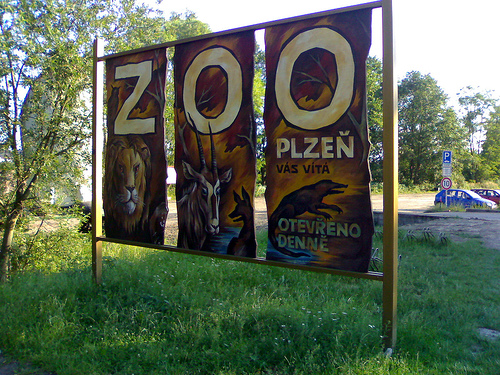 In the area of the Zoological and Botanical Gardens in Pilsen on an area of 3 ha, there is an exposition of 30 dinosaur models from the period called Trias, Jura and Křída. The largest model, the apatosaurus, measures 23 m and was the only one to be assembled on site. The popular Tyrannosaurus rex is also present. There is also a paleontological playground in DinoPark, where children discover a dinosaur skeleton. You can also visit a Dinoshop, Dinocafé and a 3D cinema.

The Moulis Eco Farm is located in the village of Milínov, 5 km from Hořehledy. This family has been farming in the Brdy Hills for more than 100 years and currently offers the opportunity to get acquainted with naturally friendly livestock breeding. You can also buy high-quality beef there.